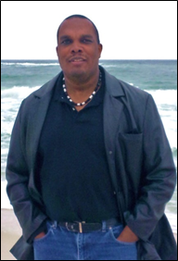 Erik O’Neal took his first formal lesson at the Art Institute of Chicago. He later went on to study art at Southern University where he earned a Bachelor of Arts Degree. Erik joined the Art Libraries Society of North America (ARLIS) in 2012. He also is a member of the Louisiana Art and Artists’ Guild and the Art Council of New Orleans. Erik was part of the Art Council of New Orleans’ 2012 class of “ Artist as Entrepreneurs”.

Erik primarily works with pastels and oils. “Impressionistic realism is how I describe my work. My goal is to bring a sense of intensity to my work and invoke passion within the viewer. I want to recreate the moment”.

Erik has exhibited his work across the country, including  the East Baton Rouge Parish Library system multiple times. He has twice been selected to participate in the Great Gulf Coast Arts Festival (2009, 2012). Erik  was a featured artist for the Gumbo Gallery in Pensacola, Florida  for the month of June 2013.  He is a gifted artist and historian and adept at teaching and conducting seminars and art events.

Quote: “I’ve been creating art for as long as I can remember. I cannot imagine not doing it. Wherever I go, whomever I meet could be an inspiration for my next painting. Art is in all of us, it’s all around us.” 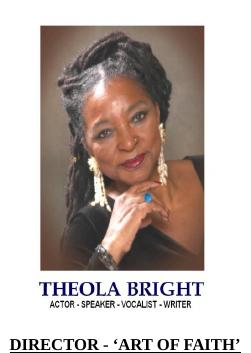 THEOLA BRIGHT is an independent, interdisciplinary artist that is a native of Mobile, Alabama, and former Artist-In-Residence for the State of Alabama.  She was educated at Blount high school in Mobile, Ann York Business school in New York City, Miami-Dade college, Florida International University, and Lindsey Hopkins Technical School in Miami, and Actors Models and Talent for Christ (AMTC) in Atlanta.

Bright is the CEO and Founder of T.C. Bright Productions Ministry, Inc. (TCBPM), which uses the arts to spread the gospel.  TCBPM collaborates with other faith based, and non-profit organizations to produce major outreach productions such as The King of Kings Unity Concert, an annual event held in conjunction with the annual Unity Walk in Mobile, AL (kingdomcovenantconnections.org), the annual Mobile International Festival (mobileinternationalfestival.org) that features a show of Bright’s original African hair and fashion designs, and The Theatre of Truth (TTOT).  Which brings historical characters to life on stage throughout the year as educational entertainment; sponsored by various organizations.

TCBPM is also the host for teaching seminars on God Consciousness, Healthy Eating and Living, Relationships, and Respect, which are presented by Theola Bright based on excerpts from her published books. These seminars are often presented with music,poetry, and songs from Bright’s collection as a vocalist and producer of the radio show, “Think About It With Theola Bright. “

Wilma E. Mosley Clopton, Ph.D.
For a person who has been everywhere, now I have a focus," Wilma Mosley Clopton says.  That focus for Clopton involves chronicling the African American story in Mississippi through the medium of film, reaching deeper into the community to find the "people, who are everyday people, that have done magnificent things." And Clopton really has been "everywhere": She studied psychology, education, and marketing; owned her own public relations firm; taught GED courses; served as a wholesale foods distributor; and now serves as the president of the Susan G. Komen Foundation (a survivor of breast cancer herself). Now she adds filmmaker, local historian, and documentarian to her list of professional endeavors.

A Vicksburg native, Clopton was reared in Jackson. After graduating from Jim Hill High School, she spent a long period of time away from Mississippi because of college, marriage (to husband, Lt. Col. William Clopton) and career, but she's been back home for the past decade.  Clopton returned to Jackson in 2004 to continue her mother's vision of vitalizing interest in African American History, and has done so through a film company, NMHS Unlimited Film Productions, working with her mother's organization, The Negro in Mississippi Historical Society.

"When my mother passed, I had made a promise to return to Mississippi and continue her work," Clopton says. "I had to figure out how best to do that. For me, film was the best interpretation of her company (NMHS) at this point of time."

Clopton's mother, Dr. Jessie Bryant Mosley, founded NMHS in the 1940s when she discovered that many Mississippians were not familiar with the contributions that African Americans made to the state.

Like her mother, Clopton focuses on Mississippi African American history and has created several documentaries featuring people such as Charles Evers (in "Through My Brother's Eyes" which focuses on his relationship with his younger brother, slain civil rights leader Medgar Evers) and Dr. Ollye Brown Shirley (the subject of "In Spite of it All"). Clopton recently completed a documentary that looks at the roles that Mississippi's people of African descent played during the Civil War, rediscovering the more than 17,000 individuals who have often been overlooked by historians.

The filmmaker takes an interactive approach to filmmaking, combining educational supplements that give the audience a wider perspective and a chance to participate in the slices of history that they see on the screen.  "With each of my films, I write publications to go with the film," Clopton says. "Rather than being a stand-alone film, we also use the books to teach math, language arts, geography and other subjects."

The documentarian has been successful in integrating these learning tools into classrooms to go alongside her films and expresses the need to keep incorporating interactive techniques with film to draw audiences closer to the subject.  Although Clopton's filmmaking craft is largely self-taught, she credits the non-profit organization Barefoot Workshops for helping her find the narrative rhythm of her stories to engages an audience. On Sept. 27, Clopton, in collaboration with Barefoot Workshops, the Mississippi Film Commission and the Mississippi Arts Commission, will provide a workshop for interested Mississippi filmmakers. Clopton will be speaking on the importance of honing the filmmaking craft and the need to be close to other creative talents when pursuing filmmaking.

When she can find the time and resources, Clopton has an infinite number of stories that she's in the process of pursuing. Those projects include a film on the 1940s Lanier bus boycott, a biopic on Senator Henry J. Kirksey and a historical documentary on the historic Farish Street community in downtown Jackson.

Clopton acknowledges that she won't be able to tell all the stories that she comes across, but that doesn't prevent her from trying. She's constantly improving her craft, and the next story is always the one that brings her happiness.

"I feel very humble for the people that share their stories with me," Clopton says. "That's a gift for people to Tell their stories ... and if you sit down and talk with individuals, most people would realize that they have more in common than they believe. I guess that's really what I'm trying to do with film. 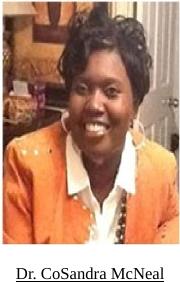 Dr. McNeal is a Professor of Sociology in the Department of Criminal Justice and Sociology at Jackson State University. She received her doctorate from the University of Nebraska-Lincoln. Her areas of teaching include Marriage and the Family, Alcohol and Drug Studies, Sociological Theory, Gender Studies, and Criminology. Her research focuses on minority health disparities, the role of Black churches in health prevention, parental marital violence and the effects on children, and the issues of gender disparities at Historically Black Colleges and Universities (HBCUs).

Currently, Dr. McNeal is a CO-Principal Investigator to an ADVANCE IT Grant from the National Science Foundation: “Transforming the Climate and Advancing STEM women at JSU.” She has also served as a Senior Personnel to other NSF funded grants: “Students Promoting Interest in Computing supported by Educational Scholarships (SPICES) and Advancing Computational Thinkers and Computing Innovators in a Cyber-Enabled Environment.  In the area of health disparities, she has received funding from the Mississippi Institute for Improvement of Geographic Minority Health, The University of Mississippi Medical Center to gain a better understanding of cardiovascular disease risk factors among college-aged African-American students. For this accomplishment, she was the recipient of the Outstanding Proposal, Community Pilot Grant Program.  Additionally, Dr. McNeal has received other pilot research grants in health disparities and the role of Black churches in health prevention.

Dr. McNeal has published manuscripts in various journals in her respective discipline, while presenting her research nationally.  For two years, she served as a mentor for the JSU NIMH-COR Honors Program; giving her the opportunity to work with bright and promising undergraduate and high school students on research projects.  She was recently elected Vice President of JSU Faculty Senate for the upcoming academic year. She has one daughter, Courtney McNeal-Thomas.